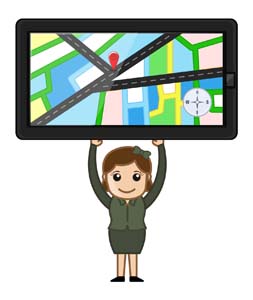 This is the moment of a true confession:  I have no sense of direction.  None. Zippo.  If I didn’t know what hand I use to make the Sign of the Cross, I would have to consciously decide which one of the two is my right.

I don’t think this makes me a bad person nor terribly unique but there have been moments in my marriage that not knowing east from west has caused a bit of friction.  Memories of trips to visit my family upstate has a dialogue that would go something like this:

Happily we are greeted at the door with hugs and the offering of a cold beer.

Oh, and then there is map reading.  Although having spent a fair number of my young adult years in the classroom, I never took a course in map reading.  I knew, however, that all I had to find was the line between where we were and where we wanted to go and get the right number of the road.  What I failed to comprehend is that the color of the line gives an indication of what kind of road you can expect:  highway, two-way road, country lane, not much more than a cow path.

And so it was in Ireland.  We were traveling in the North for the first time and the guide book was enthusiastic about a pristine view from the Irish coastline overlooking the sea.  I found the site on our map and confidently proclaimed how we should proceed to our destination. After more than an hour on what was basically a country lane, we turned onto a beaten-down grass path, to call it anything else would exult it far above its status.  However, it was  surrounded by the lushness of the Erin countryside that puts postcards to shame.  As our relatively small car bumpily continued towards our destination, a herd of cows proceeded to block our way.  With the car now in park, the biggest bull we had ever seen stopped, stared into our windshield nostrils flared,  towering over us with all his might. His demeanor left no doubt that this was his territory and we were not welcomed.  We must have appeared appropriately contrite, as minutes later he gave one loud snort and slowly walked away joining his herd and allowing us to go on our way.   Later that day, at the local pub, we toasted our success at finding that most exquisite spot and that we had not been deterred by either the bull or our own bull. My husband, however, took the haphazardly folded map back into his possession and I was relieved of my co-pilot duties.

I read once that it is not uncommon for women to lack navigation aptitude while most men appear to have it as a natural skill.  I attribute this to our early forebearers:  man—the hunter; woman—the gatherer.  The hunter had to know east from west to find his way back home;  the gatherer had to know that her cave was the one with the crooked tree limb next to it.

I don’t know if this is true or not but it is my story and I am sticking to it.  I remain internally grateful for the discovery of the GPS.